All eyes will be on Rafael Nadal at the Monte-Carlo Country Club next week as he starts his clay-court campaign for a record-extending 12th Rolex Monte-Carlo Masters crown.

Over the past 15 years, the Spanish superstar has largely dominated each spring European swing, and it’s in the Principality where, more often than not, he has laid down an early marker to his rivals. Nadal has won 71 of his 76 matches in Monte-Carlo, including an Open Era record eight consecutive titles from 2005 to 2012 and a further three crowns from 2016 to 2018.

On the eve of the 2021 Rolex Monte-Carlo Masters, which begins on Sunday, ATPTour.com looks at five contenders who may pose a threat to Nadal’s hopes of claiming a 36th ATP Masters 1000 trophy. 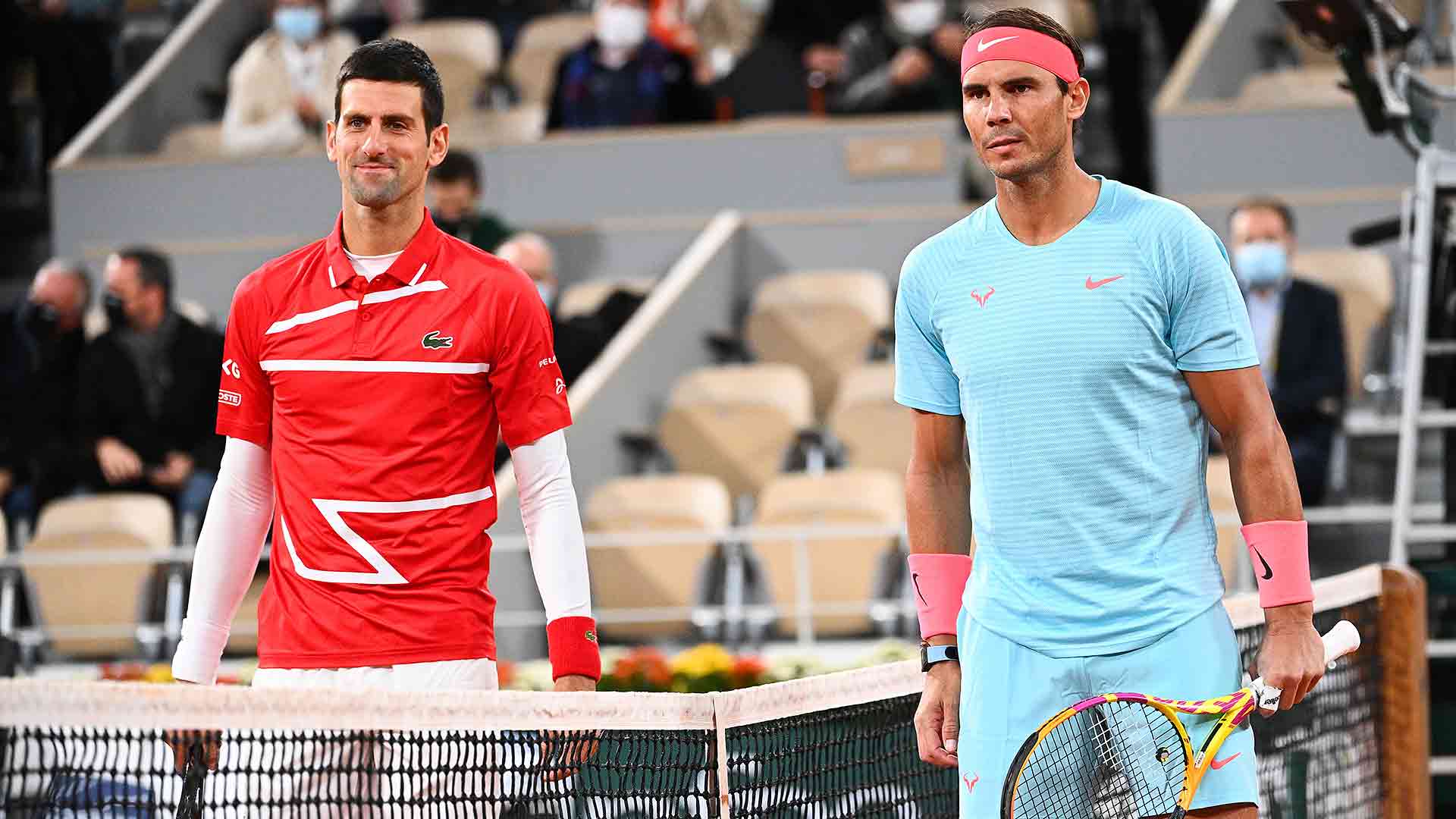 Novak Djokovic – Best Monte-Carlo Performance: 2013 & 2015 champion
Memories of how quickly Nadal dismantled the World No. 1’s game in the 2020 Roland Garros final may linger, but Monte-Carlo resident Djokovic is also notoriously strong in the Principality. The Serbian superstar picked up the 2013 and 2015 titles, when he beat Nadal in the final and semi-finals respectively, and comes into this year’s edition well-rested after capturing a record ninth Australian Open title in February.

Djokovic and Nadal have met 25 times on clay across their legendary 56-match ATP Head2Head rivalry, which Djokovic leads 29-27, but Nadal has an 18-7 advantage in their red dirt clashes that includes four matches in Monte-Carlo. Nadal, who beat Djokovic in the 2009 and 2012 Monte-Carlo finals, has won their past four clay-court matches (2017 Madrid, 2018 & 2019 Rome and 2020 Roland Garros).

Should the pair meet in the Monte-Carlo final on 18 April, both will be close to top form, and such a match will come down to small margins. Twelve of their 25 clay matches have come with a trophy on the line (Nadal leads 8-4).

Djokovic vs. Nadal in Monte-Carlo

Daniil Medvedev – Best Monte-Carlo Performance: 2019 semi-finals
With a 10-18 career record (.357) on red dirt, it can be said that Medvedev has yet to find his clay feet. But the Russian, who also resides in Monte-Carlo, proved in beating Djokovic en route to the 2019 semi-finals, that he is capable of strong performances on the surface. While Nadal leads Medvedev 3-1 in their ATP Head2Head series, the pair has never met before on clay courts.

World No. 2 Medvedev will certainly be confident, should he face Nadal in Monte-Carlo, where he trains on a regular basis, having won his last 10 matches of 2020 and his first 10 matches of 2021, a run that included 12 victories against eight different Top 10 opponents. The 25-year-old beat Nadal 3-6, 7-6(4), 6-3 in the semi-finals at the 2020 Nitto ATP Finals. Medvedev has gotten off to a 17-3 start this season, including helping Russia capture the ATP Cup crown. He went on to reach the Australian Open final (l. to Djokovic) and lifted his 10th ATP Tour title at the Open 13 Provence in Marseille (d. Herbert).

Stefanos Tsitsipas – Best Monte-Carlo Performance: 2019 Third Round
The Greek star came back from two-sets-to-love down against Nadal in a 3-6, 2-6, 7-6(4), 6-4, 7-5 quarter-final victory at the Australian Open in February, which represented his first win over the Spaniard since the 2019 Mutua Madrid Open semi-finals. That day on red dirt, Tsitsipas won 6-4, 2-6, 6-3 and the 22-year-old may fancy his chances of beating Nadal again, so early in the clay swing, if the opportunity arises in Monte-Carlo.

Tsitsipas has been in strong form so far this season, compiling a 17-5 record, which includes a semi-final run at Melbourne Park (l. to Medvedev) and a final appearance at the Abierto Mexicano Telcel presentado por HSBC (l. to Zverev). Tsitsipas, who has a 1-3 record in ATP Tour clay-court finals, lost his last clay-court match to Nadal 6-3, 6-4 in the 2019 Internazionali BNL d’Italia semi-finals.

Diego Schwartzman – Best Monte-Carlo Performance: 2017 Quarter-finals
The Argentine, who will feature in Monte-Carlo for the fifth time next week, will be aiming to draw upon his memories of beating Nadal en route to his first Masters 1000 final in September last year at the Internazionali BNL d’Italia. Schwartzman entered Rome with an 0-9 record against Nadal, but held his nerve to triumph 6-2, 7-5 in the quarter-finals.

The 28-year-old Schwartzman went on to beat Dominic Thiem in five hours and eight minutes to reach his first Grand Slam semi-final at Roland Garros, where Nadal avenged the Rome loss with a 6-3, 6-3, 7-6(0) victory. Schwartzman, who has a 3-3 record in clay-court finals, picked up the Argentina Open trophy in Buenos Aires (d. Cerundolo) last month. 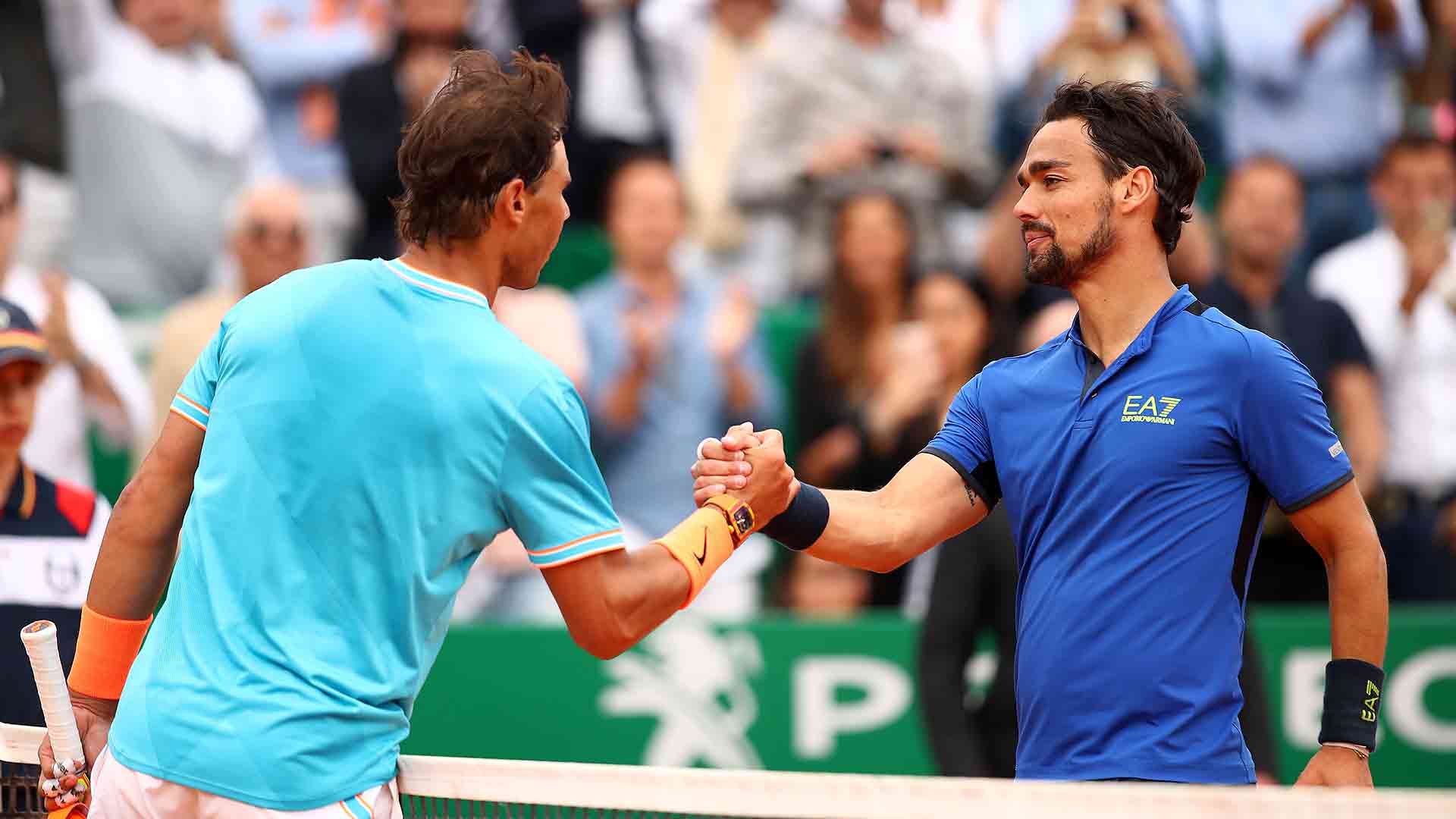 Fabio Fognini – Best Monte-Carlo Performance: 2019 Champion
At his very best, the 33-year-old Italian can beat anyone, particularly on clay, a surface on which he has recorded nine of his 15 Top 10 victories. World No. 18 Fognini, who will attempt to retain his 2019 Rolex Monte-Carlo Masters crown next week, will not fear Nadal, having won three of their nine matches on red dirt.

Fognini beat Nadal twice on clay in 2015 in the Rio Open presented by Claro semi-finals and the Barcelona Open Banc Sabadell third round. In his emotional run to the biggest title of his career two years ago, Fognini recorded a shock 6-4, 6-2 victory in the 2019 Monte-Carlo semi-finals. Nadal holds the upper-hand, 13-3 in their ATP Head2Head series, two months on from beating Fognini 6-3, 6-4, 6-2 in the Australian Open third round.